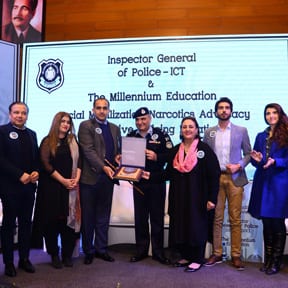 Islamabad : Inspector General of Islamabad police Amir Zulfiqar called for a collective effort to eradicate the growing use of drugs from society for the people’s development, especially youths.

“Narcotics have become an undeniable threat to our society and therefore, everyone, including parents, teachers, and friends should not only help youths know about their harms but they should also keep an eye on their activities and seek help if they learn about the use of drugs,” he told a function held at The Millennium Universal College here in collaboration with the IGP Islamabad office to launch a campaign on drug prevention among youths.

CEO of the Roots Millennium Education Chaudhry Faisal Mushtaq highlighted the role of an academic institution for bringing about a social change and reforming the lives of youths on a larger scale.

“Young people are real assets of our country. Their secure future is a responsibility that should mutually be shared by every member of society,” he said.

Editor of ‘The News’ Aamir Ghauri regretted that many people ignored the use of drugs by others considering that not to be their issue.

“We make up a society and therefore, we need to understand what the society is all about. If we know that someone around us is taking drugs but act indifferently considering that to be his or her issue, then there is a high likelihood of that becoming our issue sooner and later,” he said.

Aamir Ghauri complained that many people got so judgmental about women smokers and considered them to be bad women.

He said if someone was bad for women, then it was equally bad for men.

Regretting the growing use of drugs in Pakistani society, the editor of ‘The News’ said the drug addiction forced people to do things, which they would never like to do otherwise.

He warned that the pedlars could use addicts to serve own evil interests.

“If you can do drugs in front of everyone, including your family, teachers, neighbours, and friends, then go ahead with it but if you can’t, then don’t do it,” he said.

The students were also sensitised to the drugs issue by South Asian Strategic Stability Institute director-general Dr Maria Sultan and actors Hareem Farooq and Imran Abbas, who motivated them to make healthy and positive choices in life by rejecting any foreign influences and make their parents and country proud.